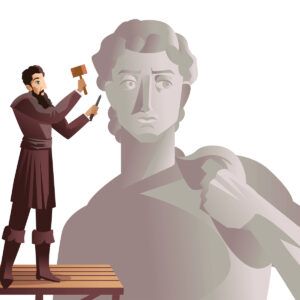 Building a compelling case at trial involves shaping the case.  The shaping process begins before the case filing and continues through the life of the case.  Just like a long and dangerous journey, a trial requires knowing where you want to go and the best way to get there.  Here are some factors I believe are crucial to shaping a persuasive trial presentation.

1.  Decide what points are most important, then organize evidence supporting those points.

The whole point of law school is teaching “how to think like a lawyer.”  It means we learn to be razor sharp in determining which facts support a particular conclusion.  We then learn how to weave these facts into a coherent legal argument.  Clients sometimes don’t know which facts really support the point they’re trying to make.  It’s not because Clients are stupid, it’s just that divorce/child-custody cases inevitably have an emotional component which clouds judgment.

For example, in any given child-custody case, one goal is to prove that you are a fit parent.  Suppose you want to establish the fact that the mother wanted to have an abortion before your child was born.  It is easy to see the emotional importance of that fact, but does that fact necessarily support the idea that YOU are a fit (adequate) parent?  No it does not.  Another parent’s actions or prior acts/thoughts/words do not really affect the issue of whether YOU are a fit parent.  Moreover, even if this is true, does it mean that the mother is unfit?  Probably not.  The fact that someone wanted an abortion prebirth doesn’t necessarily mean that they won’t take care of a child.  At best it minimally advances the allegation that mother is unfit, very minimally.

It is often bad strategy to establish a fact that doesn’t help your case just because you want the satisfaction of having that fact aired in open court.  Doing so may lead the judge to think that you are more interested in humiliating the other parent than showing what custody decision is in the best interests of your child.  If your lawyer says that a fact you want to establish isn’t important, you should probably listen.  You may be too close to the situation to make that determination.  Furthermore, your lawyer should know the facts that support the points you need to make.

Any case that ends with a trial has a long road that leads there.  There may be many hearings along the way.  Pretrial hearings usually are short, and the evidence presentation is minimal.  Court appearances always require good time management.  A pretrial hearing involves very little face time with the judge.  You have to choose which facts are most important based on the time allowed and the purpose of the hearing.  For example, I once attended a temporary order hearing where a wife used the little time we had to try and establish that her husband had been unfaithful.  Suppose that this were true.  Does that mean that the husband shouldn’t be able to spend time with their son?  Does it mean that the husband won’t properly supervise or protect their son?  Probably not.  The exasperated sighs and head shakes from the judge were not enough to convince the person to stop inquiring on this issue.  Judges are human beings, and like any human being, he/she may not be as sympathetic to you if you waste time.

Even if the fact you want to establish is helpful, there may be other facts that are MORE helpful, so you should concentrate your time around those facts.  Suppose the mother doesn’t keep a clean house.  However, she also has an anger problem.  Do you spend more time on the clean house point or the anger issue point?  Probably the anger issue.  Unless the house has roaches crawling over all the food and a mold infestation, an anger issue presents a more dangerous threat to a child.  At the very least you will need to leave enough time to adequately establish both points.

Choosing your battles involves choosing which battles to fight and when to fight them.  The other side may make allegations in a pretrial hearing or trial which you know to be completely untrue.  For example, suppose the mother alleges that you have a drug problem, which is untrue.  Do you invest a lot of time showing how she often lies based on past examples?  Probably not.  You go get a hair follicle test immediately after the hearing which shows no drug use over the past 6 months.  You choose not to engage on that issue but rather offer to produce evidence at a later date which disproves that allegation.  This is an example showing a proper choice about when to fight a battle.  Suppose in that same hearing the mother alleges you watch too much TV.  It is probably a good choice not to engage on the TV allegation but focus instead on the drug allegation.  In any child-custody case there are way too many accusations to respond and disprove each and every allegation.  You have to pick and choose the points that are most damaging.

Shaping a good trial is much more complicated than any blog article can explain.  However, if these points are utilized your case will be well on its way.

What Our Clients Say

Brady did an excellent job assisting me with my divorce proceedings. He was there for me the whole time with answers to any questions I had, and conducted himself in an upmost professional manner. Related

Send Us a Message